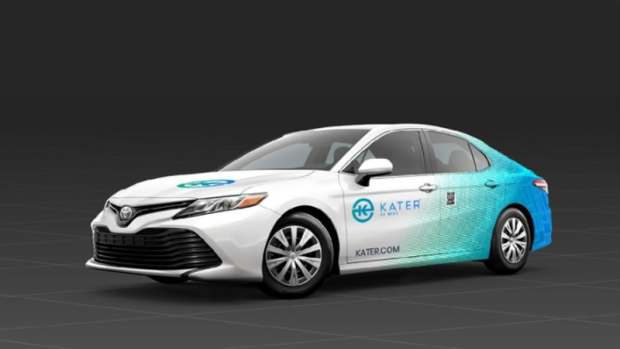 Uber and Lyft aren’t expected to launch in B.C. for several more months, but the Vancouver Taxi Association is already working with a local tech company to introduce a version of ride-hailing in some cabs.

The Ministry of Transportation confirmed the VTA has entered an agreement with Kater, an app developed in Surrey that promises “reliable rides at the touch of a button.”

The ministry said the agreement will see Kater technology used in “some taxis in the Lower Mainland,” though it’s unclear how many or when the app could launch.

A message on the Kater website indicates it’s currently in beta testing for a potential debut early this year in Vancouver, and that passengers can expect to pay a base fare of $3.20 plus 55 cents per minute and $1.84 per kilometre.

“Kater’s fare structure is in accordance with the rates set by the Passenger Transportation Board,” the app’s website reads.

The company says passengers will be able to plot their destination, pay their fare, tip their driver and rate their experience through the app – features similar to those offered by companies such as Uber and Lyft.

But Ian Tostensen of the group Ridesharing Now for BC told CTV News he sees Kater as a half-measure that won’t satisfy public demand for Uber.

Established ride-hailing companies are currently barred from B.C. because the province says it doesn’t have all the proper regulations in place to deal with them. If Kater does launch in early 2019, it will have to follow existing regulations.

A spokesperson for the Ministry of Transportation confirmed the government is “taking steps to ensure that all current provincial and licensing requirements are met including a regular, government approved safety inspection of the vehicles, insurance that will cover the carrying o paying passengers and compliance with licence boundaries and other requirements until the fall of 2019 when new regulations will come into force that will allow ride-hailing companies to enter the market.”

BC Liberal MLA Jas Johal said he’s concerned Kater could get an unfair advantage over other apps if it launches first.

“British Columbians, at the end of the day, should be choosing winners and losers based on service, based on availability, and based on pricing. Winners and losers shouldn’t be chosen by the government, and that’s what I think is happening here and that’s our overarching concern,” he said.

Asked about the agreement with Kater on Tuesday, Vancouver Taxi Association spokesperson Carolyn Bauer said it was “premature” to speak about the app.