Lime expands its ambition from scooters to cars 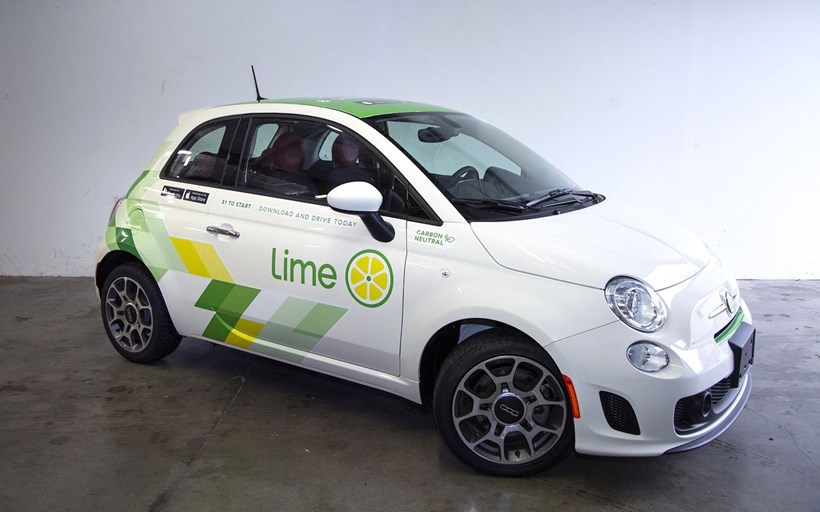 A new rideshare craze could soon hit the streets in the form of two-seater cars you locate on a cellphone app, hire by the minute, then leave at the nearest carpark once you are done.

LimePods are the latest venture from Lime, the company behind the hugely popular e-scooters which have appeared throughout Auckland, Wellington, Christchurch and Dunedin.

The company plans to seek a licence from the Auckland Council to park the pods in council-controlled spaces, sparking fears parking spots in the congested city might be even more difficult to find.

In an exclusive interview with the Weekend Herald, Lime founder Toby Sun unveiled his hopes to extend the company’s new service to cars.

Pods — which were launched in Seattle late last year — would come to Auckland first before the company looked at introducing them to regional towns.

The compact vehicle, by Italian car-maker Fiat, can be unlocked using a smartphone app and QR-Code; the same way its scooters are unlocked.

The first time you use a LimePod, you have to supply your driver’s licence details and pay a fee, which is US$15 ($21.15) in the US. Once applications are completed online, users receive credit to their Lime Wallet. Unlocking the vehicle costs US$1 ($1.44) and the per minute price is up to US40c (60c).

A non-removable key is in the ignition. Once you finish your trip, the vehicle auto-locks itself. Rides can also be paused, so you won’t lose your Pod if you nip into the dairy for some milk.

Drivers must stay within the city limits or incur a fine. Lime covers all insurance and fuel costs.

“We take a user-centric approach and a lot of people want to take longer trips that might not be a good fit for a scooter. So we’re piloting the LimePod programme,” Sun said.

“We want people to use micro-mobility [scooters and bikes] in high-density areas maybe and car-share or pod-share for suburban areas.”

Negotiations for the LimePods are expected to begin with the council should the company gain a permanent licence for its scooters, after their trial period ends on March 31.

There are a number of carsharing companies popping up around the country.

Electric car company Yoogo, which launched in Christchurch last year, has now come to Auckland but has just two cars in the city and must be picked up and dropped off at the ANZ Centre car park on Albert St.

They can be booked by the minute and unlocked via an app and picked up.

Cityhop has a fleet of more than 80 vehicles in Auckland and Wellington. But they charge by the hour rather than by the minute and have fewer, designated parking areas than what Lime wants.

Other companies, Roam, Yourdrive and Mevo allow private car owners to rent their vehicles to members of the public.

AA principal adviser for infrastructure, Barney Irvine, said typically, these kinds of schemes worked best in cities with much higher population density to that in Auckland.

“It would be really interesting to see how much demand there is out there,” he said. “If they can make it work, it’s only good news for the transport business.”

“Adding cars to a gridlocked city isn’t going to help with congestion and isn’t going to be a very quick way of getting around, unless you’re travelling after hours. The problem is, most people want to travel at the same time, which is how rush hours are created.”

Sun sees Pod reducing a city’s vehicle fleet as family’s ditch their second car in a favour of using rideshares.

In Seattle, Lime is using the Fiat 500, a petrol-powered car, and Lime staff run around town to refuel the cars.

Sun says the ultimate aim is to convert Pod to an electric vehicle fleet.

“We want to make it very affordable,” Sun said.

“It’s … cheaper than a taxi or an Uber, and it’s cheaper than taking your own car because you don’t have to pay for the parking.”

If Lime launches in Auckland with petrol-powered Pods, it will buy carbon credits to offset emissions, Sun said.

It was not yet known how many pods would be involved in an initial roll-out.

Lime Asia-Pacific manager Mitchell Price said the company was in talks with Auckland Council about making public carparks in some areas of the city mixed-use, so they could be used for one Pod or five Lime scooters.

An Auckland Council spokeswoman told the Weekend Herald it was yet to be formally approached about the idea, but is open to meeting with the company to discuss the venture.