Lyft surges in Wall Street debut, but will it last? 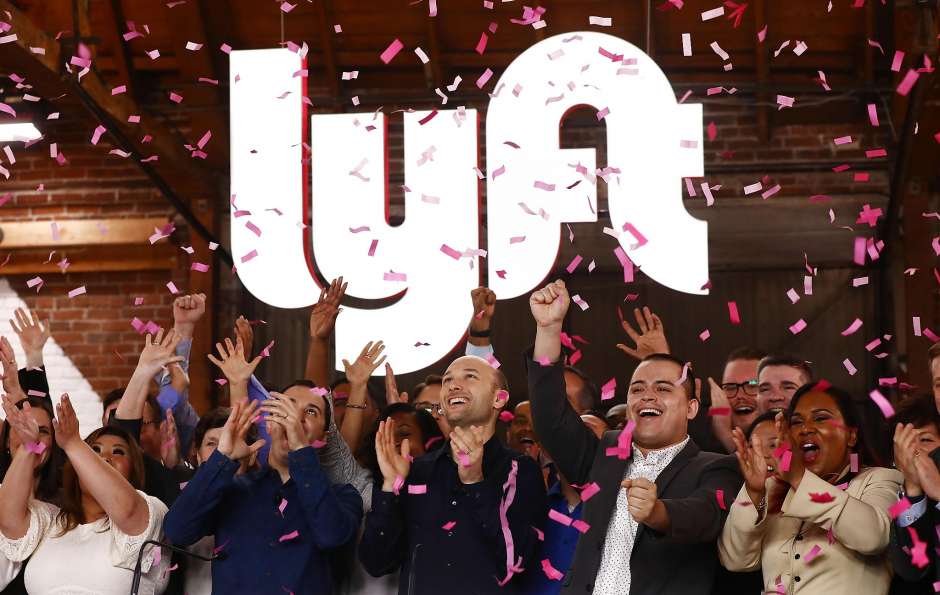 Lyft put the pedal to the metal on Wall Street, with its stock zooming up about 18 percent to $85 a share from its opening price of $72 a share in its first hour of trading as a public company on Friday.

Trading on the Nasdaq under the ticker symbol “LYFT,” the San Francisco ride-hailing service was worth $29 billion by mid-morning, compared to its opening valuation of $24.3 billion.

Investors clearly believed Lyft’s claims that it could revolutionize the $1.2 trillion U.S. transportation market, brushing aside uncertainty over its lack of profits by focusing on its growth in revenues, riders, drivers and trips. Lyft last year lost $911.3 million on revenue of $2.2 billion and its prospectus warned that it may never “achieve or maintain profitability in the future.”

Metrics such as Lyft’s market share rising to 39 percent in 2018, up from 22 percent two years earlier, mattered more to many investors.

“Lyft had the biggest losses (in the year before going public) of any prior U.S. initial public offering,” said Jay Ritter, a finance professor at the University of Florida and expert on IPOs. “But it also has enormous upside potential.”

The year’s first blockbuster initial public offering shows Wall Street’s healthy appetite for a new generation of upstart tech companies that seek to disrupt major industries. Lyft and bigger crosstown rival Uber, whose IPO is expected as soon as this month, have never made a penny but both say they will transform how people get around, replacing car ownership.

“Investors believe in the story,” said Scott Willis, head of research for Grizzle, a site that publishes research on personal finance and investing. “This is a market that values sales, and as long as those are growing quickly, Lyft stock could still go up.”

Lyft currently makes money by taking a cut of each ride it brokers. So far, it has increased revenues by squeezing how much it pays drivers — not a sustainable approach as drivers could flee if they’re not paid enough.

But analysts see other ways Lyft could make money.

It is already pursuing rentals of e-scooters and bikes. Last year it spent $250 million to buy Motivate, the largest U.S. bike-share company, which operates the Ford GoBike program in the Bay Area (now being re-branded as Lyft).

It could decrease its heavy spending on sales and marketing, such as the monetary incentives it dangles to get people to ride, said Rohit Kulkarni, senior vice president of research at Forge Global, which helps investors in private companies sell their holdings.

In the longer term, Lyft, like Uber, is banking on a future where cars drive themselves, eliminating its labor costs. Co-founder John Zimmer in 2016 predicted that robot cars would account for the majority of Lyft rides within five years— a timeline that now seems too optimistic.

Its 1.1 million drivers are independent contractors; Lyft itself says that driver turnover is high. Drivers recently have protested pay cuts and other issues; drivers in New York this year won a minimum wage guarantee that Lyft fiercely opposed. In California, proposed legislation could turn drivers into employees, increasing labor costs by 30 percent.

Wanting to recognize its most-loyal drivers, Lyft offered modest bonuses and the chance to buy shares at the opening price to drivers who’d completed at least 10,000 rides.

Wall Street is notoriously fickle. “Lyft is whispering to analysts that it will have a profit by 2021, so that sets expectations — and if they miss that, or grows slows, it will be tough,” Willias said.

CEO Logan Green and President John Zimmer, who co-founded the company seven years ago as an offshoot of a carpooling service, own substantial stakes now respectively. They will also control almost half of the voting shares, thanks to a “super-shares” program that gives each of them 20 votes for every one vote of regular investors.

Many Lyft employees may be millionaires on paper now, but they cannot liquidate their holdings until the lockup people expires in early September.

Uber, which is eyeing a jaw-dropping $120 billion valuation, overshadows Lyft not only in market share and worldwide reach, but in its staggering losses. Lyft’s $911 million loss in 2018 was the largest ever for any U.S. startup during the 12 months before its IPO, according to S&P Global Market Intelligence. Uber lost double that: $1.8 billion last year, according to its self-reported financials.

Besides Uber, other tech unicorns expected to go public this year include Postmates, Pinterest, Zoom and Slack.