Uber, Lyft protest planned Wednesday — but you’ll be able to get a ride 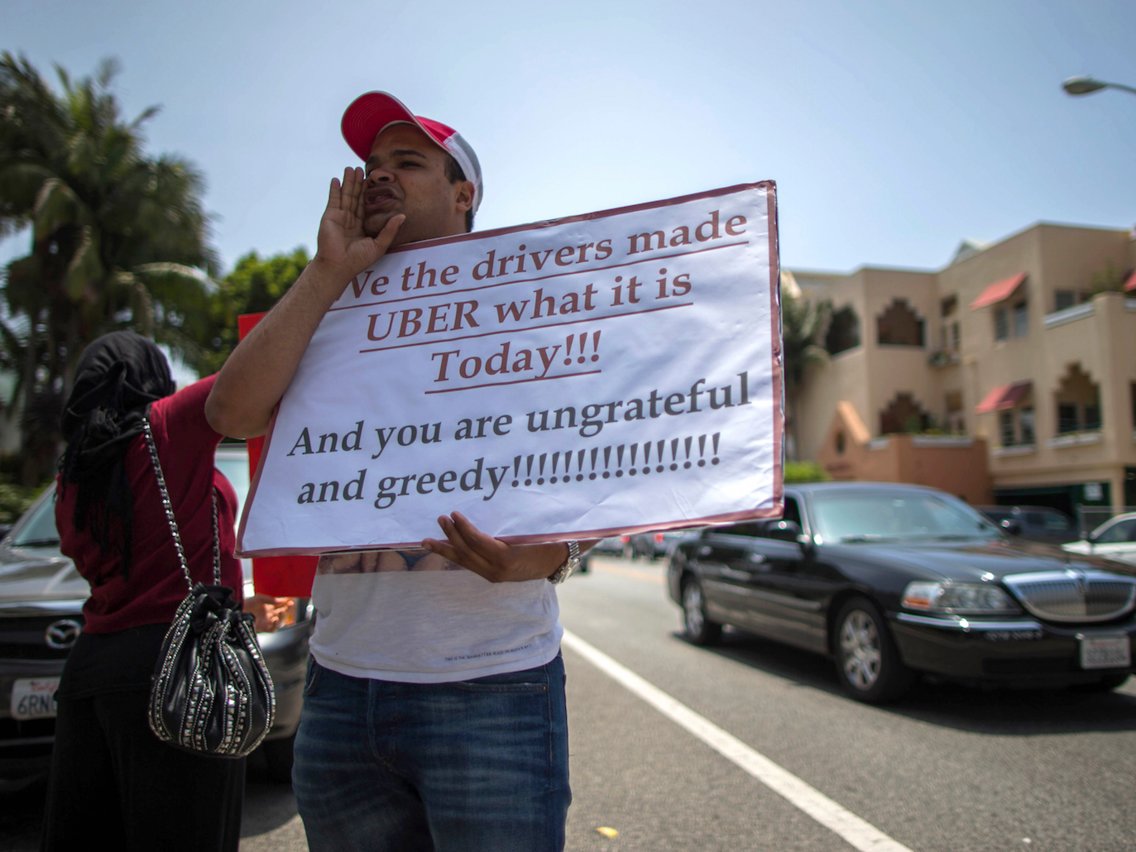 Discontent among Uber and Lyft drivers is boiling over against the backdrop of the companies’ Wall Street debuts. Uber is expected to go public on Friday in the biggest tech initial public offering since Facebook; Lyft went public last month.

The most visible manifestation will come on Wednesday, when drivers in San Francisco and other cities plan a coordinated day of protests and a work shutdown — the biggest driver actions yet against the two companies. Drivers, who work as independent contractors, say they are getting the short end of the stick even while Uber and Lyft executives, employees and investors become millionaires.

Meanwhile, behind the scenes, some drivers are writing to five large public pension funds in California, urging them to eschew investing in Uber and Lyft because of “unsustainable worker conditions,” the companies’ lack of profitability, and other reasons.

“Uber and Lyft are selling a bill of goods with their IPOs,” said Konstanine Anthony, a Los Angeles driver who co-signed the letter with Mostafa Maklad, a San Francisco driver. “They’re selling it as the greatest new tech innovation, but the way they run it is not great.”

Lyft said that its drivers’ pay averages more than $20 an hour and that three-quarters drive fewer than 10 hours a week. “We know that access to flexible, extra income makes a big difference for millions of people, and we’re constantly working to improve how we can best serve our driver community,” the statement said.

Remembering the Leslie Salt Mountain: Bay Area’s odd, glistening landmark
“Drivers are at the heart of our service ─ we can’t succeed without them ─ and thousands of people come into work at Uber every day focused on how to make their experience better, on and off the road,” an Uber spokesman said in a statement. “Whether it’s more consistent earnings, stronger insurance protections or fully-funded four-year degrees for drivers or their families, we’ll continue working to improve the experience for and with drivers.”

Local drivers plan to turn off the Uber and Lyft apps for 12 hours starting at noon on Wednesday. Although BART tweeted advice to use it to get the airport during the stoppage, experts said the actual impact is likely to be minimal since major cities have tens of thousands of drivers — and the companies can always offer surge pricing (and pick up the tab for it) to lure more out.

“It’s tough to affect the marketplace,” said Harry Campbell, a Los Angeles driver who runs The RideShare Guy blog and podcast. “A few hundred or even a thousand drivers (not working) won’t have a big impact.”

The real impact is the publicity, as passengers realize that drivers are so aggrieved.

Anthony, the Los Angeles driver, who is a single dad to a disabled 7-year-old son, works 45 hours a week for Uber but is on MediCal and is applying for food stamps.

“When I explain to riders that I’m an independent contractor and don’t get any benefits such as sick days, vacation pay or health care, it is eye-opening to them,” he said.

Even in advance, the actions are drawing intense media coverage and some political support.

“People who work for multibillion-dollar companies should not have to work 70 or 80 hours a week to get by,” tweeted Sen. Bernie Sanders, Ind. Vermont, a leading presidential candidate. “I stand with the Uber and Lyft drivers going on strike on May 8.”

The drivers’ letter to pension funds lays out dollars-and-cents considerations. Drivers’ classification as independent contractors rather than employees, increases their reliance on publicly funded social services, hurting government budgets, it said, terming Uber and Lyft as companies that “build business models based on taxpayer subsidies.”

If drivers do become employees — as could happen, given a California Supreme Court ruling and a pending bill — the companies would take a big financial hit, the letter said, reiterating points that Uber and Lyft have made themselves in their public filings.

“The drivers are trying to jam home the point that if (Uber and Lyft’s) model is based on screwing them, it’s not going to work,” he said. “They’re saying, “We’re determined to get better working conditions and we’re organizing.” ”

Ricardo Duran, a spokesman for CalSTRS, said the teachers’ pension fund pays attention to any such letters it receives. “If they have good strong fiduciary arguments, we’re always willing to listen to market participants about what makes a company a good investment or a bad investment,” he said.

Environmental or social issues have prompted CalSTRS to divest from some categories such as tobacco, some firearms and thermal coal. However, in general, its approach is to stay invested so it can “engage” with corporate leaders about issues, Duran said.

Lyft declined to comment on the letter. Uber did not immediately reply to a request for comment.

Obviously the drivers are timing their actions to coincide with all the hoopla surrounding Uber’s IPO.

“The more the reality of the existing conditions are publicized, the more pressure the companies are going to have to change their ways,” said William Gould, a Stanford law professor emeritus and former chairman of the National Labor Relations Board.

The protests are organized by driver groups, such as Gig Workers Rising in the Bay Area and Mobile Worker Alliance in Los Angeles. Many of them are getting some advice and assistance from organized labor.