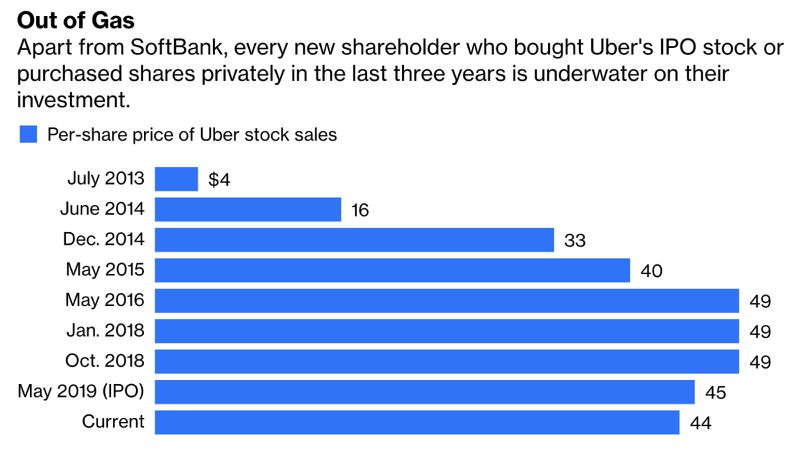 Few things prove the ancient warning “Be careful what you wish for” like a Wall Street sure thing that blows itself to smithereens.

Investment and tech gurus spent five years hawking Uber as a world-changing business and Uber stock as a stairway to fortune. Contrary voices were heard in the marketplace, it is true, but they were few and far between and in any event drowned out by the drum-beating from the other side.

But now the public market — the defining arbiter of the value of an enterprise, at least as a snapshot — has spoken, and its judgment is harsh.

On Tuesday, Uber closed at $39.96 after trading as low as $36.85, well below its close Friday, its first post-IPO trading day. This is a very eloquent price: It speaks volumes about the judgment of venture investors, about the credibility of private-market valuations of companies, and about Wall Street underwriting.

Remember that Uber was viewed as the ultmate “unicorn,” a term for venture-funded companies with private valuations higher than $1 billion. Onlookers gathered, like gawkers at a shop window, to watch how this unicorn would be transformed into a bellwether in the public markets.

Given the volatility of stock markets, Uber shares could start soaring at any time, or collapse further. At the moment, however, the stock market is saying “Bah!” Any unicorns still in the stable are likely to be marked down before they enter the auction ring.

Let’s examine Uber’s numbers. At $39.96, Uber is calculated to have a total market value of about $67 billion. That sounds like a lot for a company that has never made money and in fact lost more than $800 million in its last reported quarter, the fourth quarter of 2018.

From May 2015 on, Uber sold convertible preferred stock to venture investors on the private market at prices of $40 or higher, including 15 transactions with experienced investors at $48.77 each, totaling about $6 billion.

All those investors are underwater today on their Uber shares. The one exception, as Shira Ovide of Bloomberg observes, is SoftBank Group, a big Japanese conglomerate that acquired a $9.25-billion stake in a complex deal in January 2018 valuing the company at about $54 billion.

By the time of the IPO the glow was coming off Uber. The company’s underwriters priced the IPO in a range of $44 to $50 per share, or $84 billion or less. In the event, the shares were priced at $45 Thursday night, opened for trading Friday morning at $42 and closed at $41.57. Uber opened below $40 on Monday morning and so far has stuck at that price or less. At its closing price of $39.96, Tuesday, investors who bought into the 180 million-share IPO at Friday’s opening have sustained collective paper losses of about $907 million.

So what happened? For one thing, the private-market valuations have been exposed as folderol. This shouldn’t be a surprise — private-market transactions are always detached from reality to some extent. They’re based on nonpublic information and often reflect sentiment among a small, insular group of investors focused at least as much on the potential to cash out as on operational reality.

As Bloomberg’s Matt Levine, a former investment banker, points out, private markets don’t have a real-time referee similar to the public markets’ moment-to-moment price quotes, so it’s easy to inflate their valuations. If investors sour on a public stock, that’s instantly visible in the price. In the private markets, he writes, “if demand cools you just don’t raise more money and there’s no evidence of a lower price.”

The classic example of an inflated private value, before Uber, was Theranos, the blood-testing firm that came apart spectacularly among allegations of fraud. Much of the excitement about Theranos was based on the persona of its founder, Elizabeth Holmes, which was enough to drive the firm’s private valuation to $9 billion.

Theranos, of course, never had $9 billion; it only had an investment of about $400 million, which gave the investors a 4.4% stake. According to the magic of venture capital math, if 4.4% of a company is worth $400 million, then 100% of it must be worth about $9 billion.

Some market observers suggest that the poor performance of Uber’s IPO owes much to bad market timing. Since late last week, the stock market has cratered thanks to President Trump’s whimsical saber-rattling over tariffs with China; the market was at a record high anyway, so anything short of continued irrational exuberance was perilous.

Then there was the record turned in by the previous ride-sharing uniform IPO issuer, Lyft, which opened for trading on March 29 at $87.24. On Tuesday the shares were hovering about $50.45.

But the real cause of the revaluation of Uber is that the true nature of its business prospects is open to public scrutiny, and it’s an ugly picture. Uber’s IPO prospectus disclosed that the company has lost $10.1 billion from operations in the last three years. Its revenue continued to grow, but at a declining rate — higher by 105% in 2017 compared with 2016, but by only 42% in 2018 compared with 2017. “We may not achieve profitability,” the company disclosed.

The old adage among start-ups was that venture money was expensive money, but smart money, while public market money was cheap, but dumb. This was based on the experience and patience that smart venture capitalists could bring to a new company’s board, and the impatience of public investors that showered IPOs with cash but demanded short-term results.

The Uber and Lyft IPOs seem to have turned that on its head. Venture investors bought in at inflated prices, based on chatter about the companies’ ability to “disrupt” the stodgy old taxi industry for profit. Public investors, however, don’t seem to be buying the claim. When Uber says it’s not profitable now and may never be, they take it at its word. Maybe they’ll eventually see the same light as the venture guys did, but at the moment, the question is: Who’s turned out to be the dumb money so far?