Moving Uber and Lyft at SFO created chaos — Can LAX avoid it? 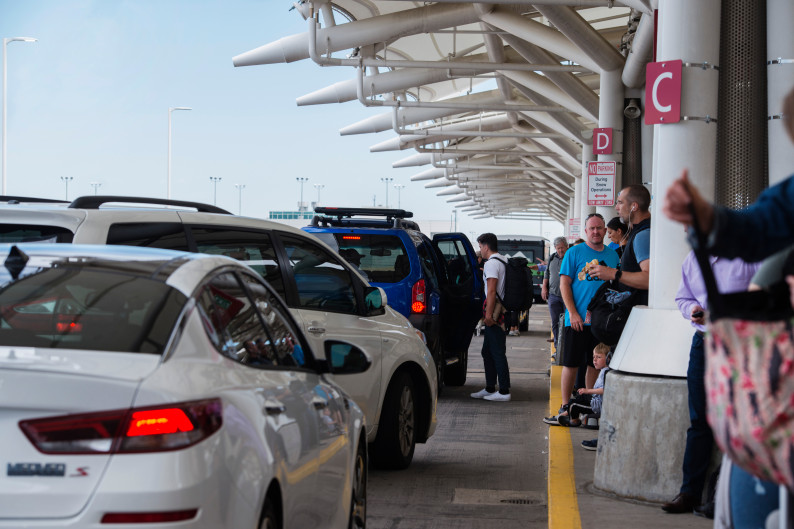 When officials at San Francisco International Airport moved Uber and Lyft pickups from the curbside to the top of a nearby parking garage, the new process went relatively smoothly — until its first Sunday night.

Amid a surge of end-of-week flights, Uber and Lyft cars overwhelmed the pickup area. Drivers stuck in traffic began canceling their ride requests out of frustration. Wait times tripled.

Within a month, the chaos had largely died down. But SFO’s rocky start offers a cautionary tale to Los Angeles International Airport, which will ban Uber, Lyft and taxi pickups from the curb in three weeks.

“This thing has to work well from day one, and we know that,” said Keith Wilschetz, a deputy executive director at Los Angeles World Airports, the city agency that runs LAX. “We’re trying very hard for there not to be a break-in period.”

Starting Oct. 29, travelers looking for an Uber, Lyft or taxi at LAX will be required to walk or take a shuttle to a waiting area just east of Terminal 1. Drop-off policies will not change.

Travelers will be out of the airport within 25 to 30 minutes of leaving the terminal, officials said. Right now, summoning a car, meeting the driver at the curb and getting out of traffic jams in the horseshoe can take an hour.

When SFO removed Uber and Lyft pickups from the curb in early June, the city and both ride companies stationed workers around the airport to help guide travelers to the top of a nearby parking garage.

The changes took effect on a Tuesday, and drivers who worked during the week had adjusted by the first weekend. But many casual and part-time drivers did not encounter the changes until Sunday evening, the busiest time of the week, said Doug Yakel, an SFO spokesman.

It’s not uncommon to see more than 1,200 Uber and Lyft drivers at SFO in the first 15 to 20 minutes of the peak period on Sunday nights, airport director Ivar Satero told officials in July. A high volume of traffic — the equivalent of more than one car per second — overwhelmed the pickup area’s sole entrance and exit.

Cars spilled across the airport access road and backed up onto the 101 Freeway nearby. Many Uber and Lyft drivers grew so frustrated that they canceled their rides and left, Yakel said. The cancellation rate for rides out of SFO spiked to 34%.

The airport has since opened another entrance to the pickup area during peak periods to reduce traffic backups, and another parking lot where drivers can wait for ride requests.

Uber, Lyft and SFO officials prepared educational materials for drivers, including a video showing a through-the-windshield route of the new pickup plan. Whether it helped was unclear, Yakel said, because “it all depends on whether drivers are reading their emails.”

Even for high-tech companies, a low-tech solution for outreach worked best, he said. The airport handed out fliers to drivers in the parking lots where they waited for fares.

LAX plans to rely on Uber and Lyft to notify and educate drivers about the changes, because it would be “very impractical” for LAX to run a similar program, Wilschetz said.

Lyft “will be sharing more with drivers and the public before the changes,” spokeswoman Lauren Alexander said in an email. Uber did not return a request seeking comment.

Uber and Lyft account for 27% of the 100,000 vehicles in the LAX terminal area on an average day. Taxis make up 4%. Shifting pickups to a parking lot will eliminate about 15% of daily vehicle traffic, which should help traffic flow, Wilschetz said.

Airport officials converted a parking lot just east of LAX’s Terminal 1 into a pickup plaza with bathrooms, umbrellas and phone charging stations. The area, at the intersection of Sky Way and World Way, will also have food trucks that will operate from 5 a.m. to 1 a.m.

The pickup area will have one entrance and exit for drivers, and a separate entrance for shuttles. Uber and Lyft drivers will approach from the north, on Sky Way, and make a left turn across the roadway to enter the lot. The intersection will be staffed 24 hours a day by a traffic officer, Wilschetz said.

The pickup lot will have a series of queues where up to 93 Uber and Lyft cars can load passengers simultaneously. An area nearby has space for 40 taxis. Attendants inside the lot will be able to answer questions, officials said.

Travelers will reach the area by boarding bright green shuttles at the terminals, or by walking. The shuttles are supposed to arrive every three to five minutes, and will make a maximum of two stops before going to the pickup lot.

Travelers may be imagining sitting in apocalyptic congestion on the shuttle, airport officials said, but the lanes closest to the terminal on the arrivals level will be converted to bus-only lanes to speed travel times.

That change, Wilschetz said, will leave a lot of people feeling “pleasantly surprised.”

When the inner curbs on the arrivals level are reconfigured, drivers picking up friends or family will stop in the outer loop instead. The curb islands between the two traffic loops will be widened to accommodate people waiting for rides.

“It’s going to be a different group of cars and shuttles in the outside lanes, but there should be plenty of room for everybody,” Wilschetz said. “We don’t anticipate any real change in the general traffic conditions or traffic flow.”

If there are unexpected problems, Wilschetz said, LAX has about a month to improve the system before passenger travel spikes at Thanksgiving.